Fertilizer is confusing, and no wonder. Shelves are stacked with more types of fertilizer than supplements in a health food store. All are in brightly coloured packaging adorned with pictures of gorgeous flowering plants and unblemished vegetables.

There are fertilizers for tomatoes, ones for roses, another for perennials and so on. All you need to do is match the plant to the fertilizer, right? It couldn’t be easier, except if you grow roses, tomatoes, and dozens of other types of plants, you’ll soon have a full shopping cart. The truth is, you could get by with only one type of commercial fertilizer, or even none if it’s for the garden. By using compost and mulch there, you’d still be fertilizing, but as nature does it.

You’ll note packages of fertilizer always have three numbers. These represent the three main nutrients plants require — nitrogen, phosphorous, and potassium, noted as N-P-K. If the K is throwing you off, that’s because it comes from the scientific term, kalium. These numbers indicate the percentages of each element in the package or bottle. 10-15-10 means it contains 10% nitrogen, 15% phosphorus, and 10% potassium. 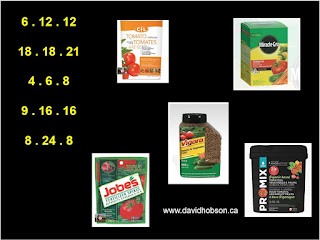 You might be wondering why there are so many different proportions listed, and why manufactures can’t agree on those proportions. Next time you’re shopping for fertilizer, ignore the glossy images that were shot in a studio and compare those numbers.

You’ll immediately see they differ from brand to brand even though they’re specified for the same type of plant. I’ve seen brands of fertilizer formulated for tomatoes with the numbers 6-12-12, 4-6-8, 8-24-8, and 18-18-21. No wonder the consumer is confused.

Now you might be wondering how they came up with the numbers in the first place. When plants were first analyzed, it was found they contained different proportions of these three nutrients. It was then assumed that each type of plant required fertilizer in the same proportion, except plants don’t use nutrients the same way at the same time as they’re growing. They take up what they need from the soil when they need it.

It’s much like going to the grocery store when you’re out of milk, butter, or eggs. You buy what you need rather than stuffing the refrigerator. A balanced fertilizer, that is one with equal percentages, say 5-5-5 or 10-10-10, is fine in most situations, but by juggling the numbers manufacturers were able to make their products appear unique. And that’s when marketing with numbers began. But do you really need all that fertilizer? If you’re growing in pots and planters, indoors or out, yes you will need it, as most soil-less mediums have little or no nutrients, unlike real soil. 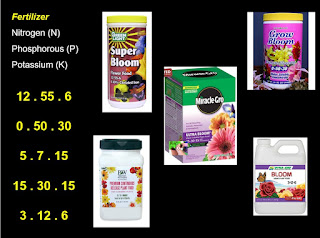 In the garden it’s a different matter. Remember that middle number, the one representing the phosphorus percentage? The soil in this area began with a limestone base, and as it degraded over time we were left with plenty of phosphorous in the soil. Garden soil doesn’t need any extra. In fact, so much has been added waterways are being polluted by it.

As for the last number representing potassium, it’s only likely to be deficient in light, sandy soils, not in the typical clay soils we have in our gardens. This leaves nitrogen, the first of the trio. Nitrogen does not stick around in soil, which is why we’re forever fertilizing lawns. By adding compost and mulch, nitrogen and other nutrients are returned to the soil as the organic material is broken down.

Bottom line: If your plants are growing poorly, fertilizer is rarely the solution, and too much can be deadly.Your pots and planters will need it, so use the fertilizer of your choice, ideally, one with a ratio corresponding to 3-1-2 that lists additional micronutrients. These are important and usually found in the fine print.

Finally, do heed the directions. Like soap powder in the washing machine, more is not better.

Posted by David Hobson at 4:46 AM No comments:

Goodbye garden, hello houseplants. Inside or out, plants have much the same requirements, although providing them indoors can be more challenging. They need appropriate light, food, and water, and they need soil to grow in, unless you want to try hydroponics, but other than rooting a cutting in a glass of water, that’s the limit of my experience. However, I have messed around with potting soil, at least a truckload over the years.

First, to clarify, there’s potting soil, and potting mix, and the terms are used interchangeably and not always accurately. Those brightly coloured plastic bags with bragging labels can be confusing. The difference is potting soil contains soil, often only a little, sometimes a lot. It’s more suitable for use outdoors, but lots of houseplants have been grown well in regular garden soil as it was all there was in the old days.

However, most products on the shelf are potting mixes, sometimes referred to as soil-free. They contain any number of ingredients, with the usual claims for best results, but the ingredients aren’t always on the label. They can contain coco coir, wood fibers, peat moss, vermiculite, clay, pumice, or perlite. All have their uses, but none are essential for growing plants.

Most plants grow best in a lightweight medium that provides a balance between moisture and air. Most potting mixes are made up of finely shredded peat moss. Perlite is usually added to improve drainage, and it also helps retain moisture. Perlite is a naturally occurring siliceous volcanic rock that after processing looks like tiny bits of popcorn. Cheaper, no-name brands might even contain tiny beads of polystyrene as a perlite substitute (I my darker moments, I’ve often thought potting mixes would be a handy way to dispose of industrial waste). Some mixes also contain vermiculite, a spongy, gold coloured volcanic mineral added to help retain moisture.

Lime is usually added to neutralize the slightly acidic peat moss, but it’s hardly necessary as our calcium rich, hard water will do the job nicely. Other ingredients may include wetting agents to promote absorption of moisture, slow-release fertilizers, and charcoal, which is a natural filter that absorbs decaying plant odors. Stinky plants are usually a result of overwatering that causes roots and other organic matter to rot in the pot. The problem with added fertilizer is you have no control over the amount, and since we all use our preferred fertilizers as well, there’s a danger of overfertilizing. I prefer to be in control.

A more recent addition to the potting mix range are products with mycorrhizal fungi. This microscopic fungi plays a useful role as it forms a symbiotic relationship with plant roots, whereby it helps supply nutrients in return for carbon. It’s normally present in healthy garden soil, not much so in soil-free mixes. Sounds like a clever idea to add it, right? It won’t hurt, might help, but a drawback is when fertilizers containing phosphate are used frequently, as they often are with houseplants, and most do contain phosphate, it disrupts that root/fungi connection, so there’s little benefit.

Adding a spoonful of garden soil can provide the same fungi, except you’d be adding other, less desirable soil creatures such as fungus gnats, those pesky insects that look like fruit flies. They’re so annoying and the seem to show up with any planting medium, including purchased products. I’ve been successful in discouraging them by adding a layer of sand, grit, or perlite to the soil surface of my houseplants. It prevents the gnats from reaching the organic matter to lay their eggs. Add a yellow sticky strip to take care of any that are still flying about and you won’t be wishing you’d left the houseplant outside.

Houseplants? With summer weather lasting into November, it’s been a long goodbye to the garden this year.

Posted by David Hobson at 3:07 AM No comments:

I’m going to sow seeds outdoors, this week — really. If you’re imagining me pushing a snow shovel across the veggie garden to get to the soil, forget it. I won’t be in the garden as most of the process takes place indoors.
I’ll be winter sowing, and compared to growing seedlings indoors or under lights, it’s less finicky and costs almost nothing. Winter sowing produces tough, sturdy plants, unlike the weak-kneed specimens grown on a windowsill. You can start tomorrow or anytime over the next couple of months.
Most annuals and familiar perennials, and cool season vegetables can be winter sown, but you won’t have any luck with tender plants or exotic species. A good choice are plants that are referred to as hardy, or come with instructions to direct sow outside in fall or in early spring. These are plants that would normally cast their seed in fall, and then sprout up the moment conditions are right. Sure, in the garden many may be considered weeds, however in my garden they’re more likely to be popular garden plants that I grew the previous year. I look on these as free plants — or grandchildren.
When we grow plants indoors, some seeds come with instructions for special treatment that simulates what they typically experience in their normal outdoor environment. They have to be soaked for a time or scarified, that is, nicking or using sandpaper to wear down the hard husk. Others have to be given a spell in the freezer for the purpose of cold stratification. This freezing and thawing or cool dampness outdoors is what breaks down the tough husk of the seed, allowing it to germinate. To reproduce the same process indoors can be tedious and not always reliable.  Winter sowing takes care of this naturally.
You’ll be pleased to hear there’s no need to go tramping through the snow, but simply plant seeds in jugs and set them on the deck or patio. All you need are a few clear or opaque containers and soil and seeds. Gallon jugs are perfect, and all those windshield washer jugs are fine, just rinse well. Some use two litre water bottles. I really like the large water dispenser bottles.
First, drill or cut a few small holes in the bottom of the container. This is to allow excess water to drain but not so large that the soil could fall out. If the container has only a very narrow opening, make a couple of extra holes or cuts near the top to allow for air circulation. Next step is to slice open the container about two thirds up on three sides, leaving one side (or a small section if the container is round) to act as a hinge.
Now place soil in the container. Garden soil is fine, but you don’t want to be out digging in the garden at the moment. Most any potting soil will do. Moisten the soil then sow your seed. Cover them as per packet instructions, or if unsure, about the same as the diameter of the seed. Close up the container and tape it shut along the sides but leave the screw cap off. Now all you have to do is set them outdoors.
If snow buries them, don’t worry. A little snow will fall in and that’s okay too, however, check occasionally to be sure the soil hasn’t dried out. If the weather is especially warm in early spring, remove the tape and open the containers for a while during the day. As the seeds sprout in early spring, you can open them up and leave them open. When the seedlings are large enough they can be planted in the garden.
There, you’re almost gardening already. What a great start to the new year.
Posted by David Hobson at 1:57 AM 1 comment: